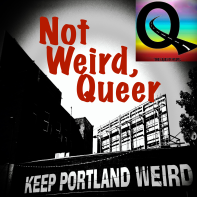 Launched in 2014 on KPQR Portland, it now airs on QLRadio.  Steve began building his music library of music from LGBT artists while co-hosting The Quest of Life Radio Show (2003-2013) on WRPI Troy, NY.

He has judged for national and international LGBT music awards, appeared in a BBC RADIO 4 documentary on gender in music and is a music correspondent for This Way Out International LGBT Radio News Magazine airing weekly on over 200 stations around the globe.